Watch Me - A Memoir by Anjelica Huston - Audio CD 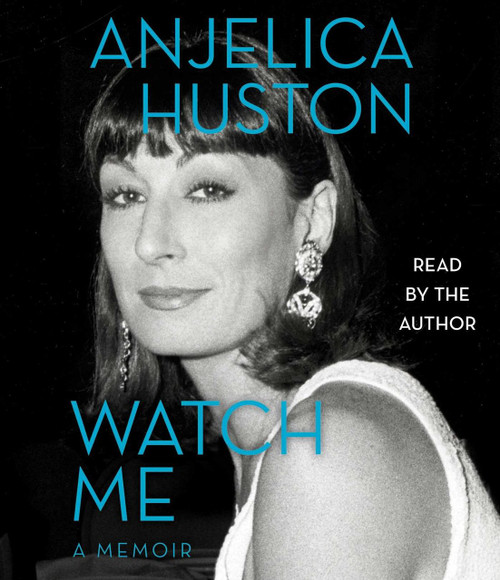 Watch Me - A Memoir by Anjelica Huston - Audio CD

SKU:
UPC:
9781442372702
Condition:
New
Availability:
Usually Ships in 24 Hours
Shipping:
Free Shipping
This audiobook is a publisher's overstock:
It is in shrink-wrap and will have a remainder" (scratch or pen) mark through UPC code, some items will have minor exterior wear from being handled."

Watch Me - A Memoir by Anjelica Huston - Audiobook, CD, Unabridged

Following her “extraordinary” (Vanity Fair), “evocative” (The New York Times), “magically beautiful” (The Boston Globe), “gorgeously written” (O, The Oprah Magazine) coming-of-age memoir, Academy Award-winning actress Anjelica Huston writes about her relationship with Jack Nicholson, her rise to stardom, her work with the greatest directors in Hollywood, her love affair with her husband, and much more.

Anjelica Huston was twenty-nine years old and trying to create a place for herself as an actress in Hollywood when the director Tony Richardson said to her: “‘Poor little you. So much talent and so little to show for it. You’re never going to do anything with your life.’ Tony had a singsong voice, like one of his own parrots, but there was no mistaking the edge. ‘Perhaps you’re right,’ I answered. Inside I was thinking, Watch me.”

In A Story Lately Told, Anjelica Huston described her enchanted childhood in Ireland and her glamorous but troubled late teens in London. That memoir of her early years ended when Anjelica stepped into Hollywood. In Watch Me, Huston tells the story of falling in love with Jack Nicholson and her adventurous, turbulent, high-profile, spirited seventeen-year relationship with him and his intoxicating circle of friends. She writes about learning the art and craft of acting, about her Academy Award-winning portrayal of Maerose Prizzi in Prizzi’s Honor, about her roles as Morticia Addams in the Addams Family films, Etheline Tenenbaum in The Royal Tenenbaums and Lilly Dillon in The Grifters, and about her collaborations with many great directors, including Woody Allen, Wes Anderson, Bob Rafelson, Francis Ford Coppola, and Stephen Frears. She movingly and beautifully writes about the death of her father, the legendary director John Huston, and her marriage to sculptor Robert Graham. She is candid, mischievous, warm, passionate, funny, and a superb storyteller.

About the Author
Academy Award-winning actress and director Anjelica Huston has received honors from the National Society of Film Critics; the Independent Spirit Awards; and the Golden Globe Awards; as well as multiple Oscar, BAFTA, and Emmy awards or nominations. Huston most recently starred on the hit TV show Smash. She is the author of the memoirs A Story Lately Told and Watch Me.

All By Myself, Alone - A Novel by Mary Higgins Clark - Unabridged Audiobook - 6 CDs

12 - The Elements of Great Managing by Rodd Wagner Audio CD

The Charming Quirks of Others Alexander McCall Smith 7 CDs