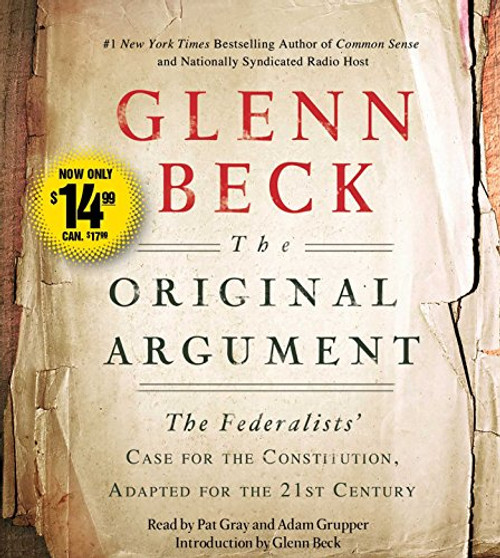 SKU:
UPC:
9781442375994
Condition:
New
Availability:
Usually Ships in 24 Hours
Shipping:
Free Shipping
This audiobook is a publisher's overstock:
It is in shrink-wrap and will have a remainder" (scratch or pen) mark through UPC code, some items will have minor exterior wear from being handled."

The Original Argument: The Federalists Case for the Constitution, Adapted for the 21st Century by Glenn Beck - Audiobook 7 CDs

In the vein of his #1 New York Times bestselling Common Sense, Glenn Beck offers The Federalist Papers—selected and adapted into contemporary English—now available from Encore for a great value!

Glenn Beck revisited Thomas Paine’s famous pre-Revolutionary War call to action in his #1 New York Times bestseller Glenn Beck’s Common Sense. Now he brings his historical acumen and political savvy to this fresh, new interpretation of The Federalist Papers, the eighteenth-century collection of political essays that defined and shaped our Constitution and laid bare the “original argument” between states’ rights and big federal government—a debate as relevant and urgent today as it was at the birth of our nation.

Adapting a selection of these essential essays—pseudonymously authored by the now well-documented triumvirate of Alexander Hamilton, James Madison, and John Jay—for a contemporary audience, Glenn Beck has had them reworked into “modern” English so as to be thoroughly accessible to anyone seeking a better understanding of the Founding Fathers’ intent and meaning when laying the groundwork of our government. Beck provides his own illuminating commentary and annotations and, for a number of the essays, has brought together the viewpoints of both liberal and conservative historians and scholars, making this a fair and insightful perspective on the historical works that remain the primary source for interpreting Constitutional law and the rights of American citizens.

About the Author:
Glenn Beck, the nationally syndicated radio host and founder of TheBlaze television network, has written thirteen #1 bestselling books and is one of the few authors in history to have had #1 national bestsellers in the fiction, nonfiction, self-help, and children’s picture book genres. His recent fiction works include the thrillers Agenda 21, The Overton Window, and its sequel, The Eye of Moloch; his many nonfiction titles include Conform, Miracles and Massacres, Control, and Being George Washington. For more information about Glenn Beck, his books, and TheBlaze television network, visit GlennBeck.com and TheBlaze.com.

"About this title" may belong to another edition of this title.

Stuff You Should Know - by Josh Clark & Chuck Bryant - HC