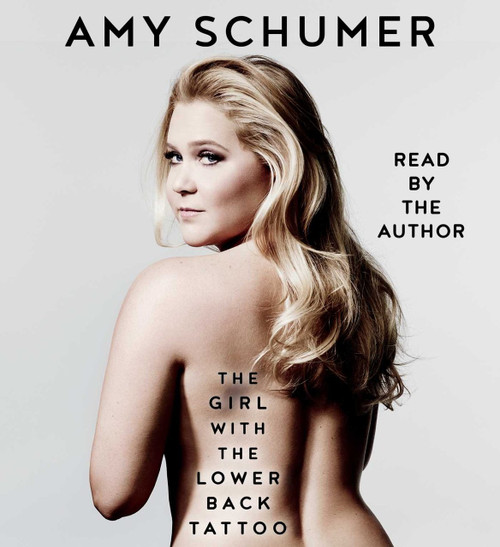 SKU:
UPC:
9781508222002
Condition:
New
Availability:
Usually Ships in 24 Hours
Shipping:
Free Shipping
This audiobook is a publisher's overstock:
It is in shrink-wrap and will have a "remainder" (scratch or pen) mark through UPC code.

“Amy’s got your back. She’s in your corner. She’s an honesty bomb. And she’s coming for you.”
—Actress Tilda Swinton and Trainwreck co-star

The Emmy Award-winning comedian, actress, writer, and star of Inside Amy Schumer and the acclaimed film Trainwreck has taken the entertainment world by storm with her winning blend of smart, satirical humor. Now, Amy Schumer has written a refreshingly candid and uproariously funny collection of (extremely) personal and observational essays.

In The Girl with the Lower Back Tattoo, Amy mines her past for stories about her teenage years, her family, relationships, and sex and shares the experiences that have shaped who she is—a woman with the courage to bare her soul to stand up for what she believes in, all while making us laugh.

Ranging from the raucous to the romantic, the heartfelt to the harrowing, this highly entertaining and universally appealing collection is the literary equivalent of a night out with your best friend—an unforgettable and fun adventure that you wish could last forever. Whether she’s experiencing lust-at-first-sight while in the airport security line, sharing her own views on love and marriage, admitting to being an introvert, or discovering her cross-fit instructor’s secret bad habit, Amy Schumer proves to be a bighearted, brave, and thoughtful storyteller that will leave you nodding your head in recognition, laughing out loud, and sobbing uncontrollably—but only because it’s over.

About the Author
Amy Schumer has become one of the most influential figures in the entertainment industry as a stand-up comedian, actress, writer, producer, and director. Her smash hit television series, Inside Amy Schumer, has won a Peabody Award, a Critics’ Choice Television Award, and two Primetime Emmy Awards. She wrote and starred in her first feature-length film, Trainwreck, which dominated the 2015 summer comedy international box office and was nominated for two Golden Globes and won both the Critics’ Choice Award for “Best Actress in a Comedy,” and a Hollywood Film Award for “Comedy of the Year.” She earned a 2018 Tony nomination for her performance in Meteor Shower on Broadway and starred in the 2018 summer hit I Feel Pretty. As a stand-up comedian, she continues to perform to sold-out audiences around the world. Her 2016 tour was voted Pollstar’s Comedy Tour of the Year. Schumer was raised in New York City and Long Island and loves her brother and sister the very most.

Back From the Dead by Bill Walton - Audio CD

The Boston Girl - A Novel by Anita Diamant Audio CD

The Family of Jesus by Karen Kingsbury Audio CD

Cooking with Flavor Bombs: Prep It, Freeze It, Drop It . . . Transform Dinner! by Giovannina Bellino- Hardcover

The Joy of Pregnancy 2nd Edition: The Complete, Candid, and Reassuring Companion for Parents-to-Be by Tori Kropp- Paperback