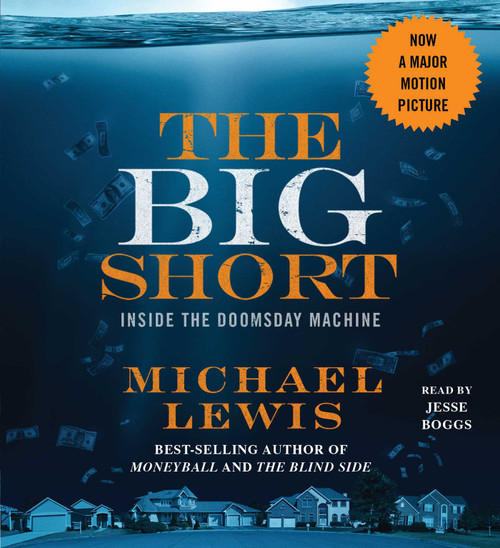 SKU:
UPC:
9781508214465
Condition:
New
Availability:
Usually Ships in 24 Hours
Shipping:
Free Shipping
This audiobook is a publisher's overstock:
It is in shrink-wrap and will have a remainder" (scratch or pen) mark through UPC code, some items will have minor exterior wear from being handled."

The Big Short: Inside the Doomsday Machine by Michael Lewis - Unabridged Audiobook 8 CDs

In the tradition of Michael Lewis’s blockbusters Moneyball and The Blind Side, the Encore edition of the #1 New York Times bestseller and “one of the best business books of the past two decades” (The New York Times) will tie in with the upcoming feature film starring Christian Bale, Brad Pitt, Ryan Gosling, and Steve Carell.

When the crash of the US stock market became public knowledge in the fall of 2008, it was already old news. The real story of the crash began the previous year in bizarre feeder markets where the sun doesn’t shine and the SEC doesn’t dare, or bother, to tread: the bond and real estate derivative markets where geeks invent impenetrable securities to profit from the misery of lower and middle-class Americans who can’t pay their debts. The smart people who understood what was or might be happening were paralyzed by hope and fear; in any case, they weren’t talking.

Michael Lewis creates a fresh, character-driven narrative brimming with indignation and dark humor, a fitting sequel to his #1 bestseller Liar’s Poker. Out of a handful of unlikely heroes, Lewis fashions a story as compelling and unusual as any of his earlier bestsellers, proving yet again that he is the finest and funniest chronicler of our time.

About the Author
Michael Lewis, the bestselling author of The Undoing Project, Liar’s Poker, Moneyball, The Blind Side, and The Big Short, among other works, lives in Berkeley, California, with his wife and three children.

Toward a Unified Theory of Development by John Spencer - Hardcover

The Art Of Happiness: A Handbook For Living by His Holiness the Dalai Lama - Abridged Audiobook 3 CDs

Being Well (Even When You're Sick) by Elana Rosenbaum - PB