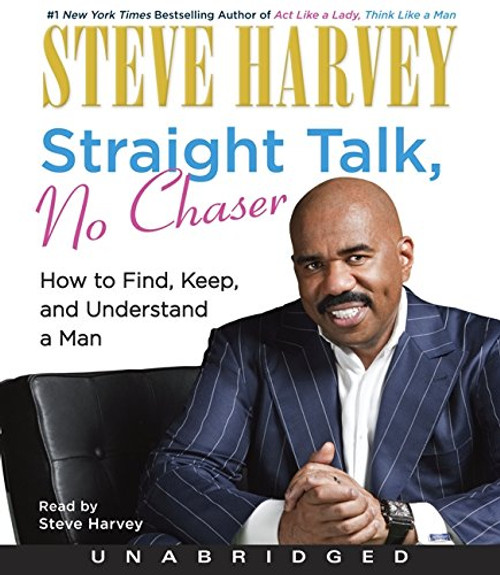 In the instant #1 New York Times bestseller Act Like a Lady, Think Like a Man, Steve Harvey gave millions of women around the globe insight into what men really think about love, intimacy, and commitment. In his new book, he zeros in on what motivates men and provides tips on how women can use that knowledge to get more of what they need out of their relationships.

In Straight Talk, No Chaser: How to Find, Keep and Understand A Man, Steve Harvey shares information on:

About the Author
The author of Act Like a Success, Think Like a Success; Act Like a Lady, Think Like a Man; and Straight Talk, No Chaser, Steve Harvey began doing stand-up comedy in the mid-1980s. His success as a stand-up comedian led to the WB’s hit show The Steve Harvey Show, which has won multiple NAACP Image Awards. He was featured in Spike Lee’s film The Original Kings of Comedy. In addition to his nationally syndicated Steve Harvey Morning Show, Steve hosts a daily talk show on NBC, is the gameshow host for Family Feud and Celebrity Family Feud, and most recently NBC’s top rated new show, Little Big Shots. A philanthropist, he is the founder of the Steve and Marjorie Harvey Foundation. He lives in Atlanta, Georgia and Chicago, Illinois.

100 Ways to Motivate Yourself by Steve Chandler Audio CD

Getting to Yes with Yourself by William Ury Audio CD

Think Like a Freak -Retrain Your Brain by Steven D. Levitt Audio CD