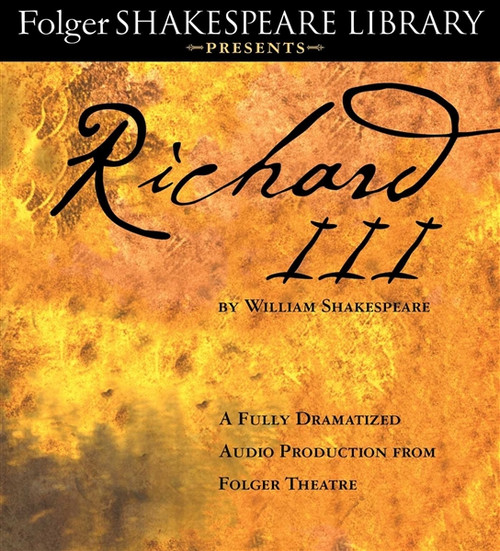 SKU:
UPC:
9781442381544
Condition:
New
Availability:
Usually Ships in 24 Hours or Less
Shipping:
Free Shipping
This audiobook is a publisher's overstock:
It is in shrink-wrap and will have a remainder" (scratch or pen) mark through UPC code.

Richard III: Fully Dramatized Audio Edition by William Shakespeare [Audiobook] [Unabridged] [Folger Shakespeare Library]
FOLGER SHAKESPEARE LIBRARY
The Worlds Leading Center for Shakespeare Studies
The Folger Shakespeare Library, home to the worlds largest Shakespeare collection, brings Richard III to life with this new full-length, full-cast dramatic recording of its definitive Folger Edition.
In Richard III, Shakespeare invites us on a moral holiday. The play draws us to identify with Richard and his fantasy of total control of self and domination of others. Not yet king at the start of the play, Richard presents himself as an enterprising villain as he successfully plans to dispose of his brother Clarence. Richard achieves similar success in conquering the woman he chooses to marry. He carves a way to the throne through assassination and executions.
But Richard also meets resistance, most threateningly from Queen Margaret, widow of King Henry VI, whom he killed before the plays beginning. Margaret issues a stream of curses, including one on Richard.
Gradually, the curses are fulfilled, suggesting the curse on Richard may come true, too. Increasingly, the play directs our sympathies away from Richard. His supporters desert him; his victims pile up. We may begin to share in the desire for vengeance voiced by Margaret.
This new unabridged audio recording of the well-respected edition of Shakespeares classicexpertly produced by the Folger Theatreis perfect for students, teachers, and the everyday listener.

Being a Dog by Alexandra Horowitz  - Unabridged Audiobook 8 CDs