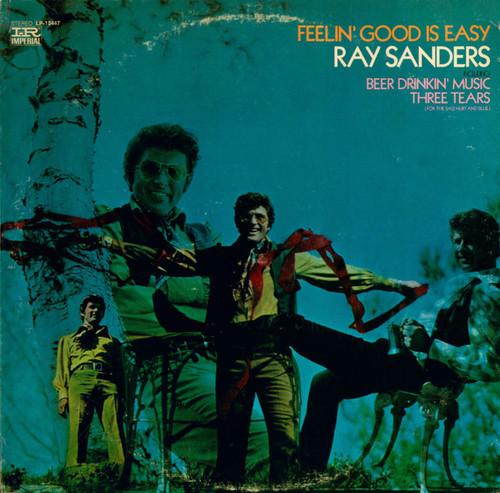 A1 Three Tears (For The Sad, Hurt And Blue)
A2 Honky Tonk Man
A3 Lonely Eyes
A4 Red Red Wine
A5 Lucille
A6 Beer Drinkin' Music

Raymon Sanders (born October 1, 1935 in Saint Johns, Kentucky and died on October 13, 2019) was an American Country Music artist. Between 1960 and 1980, he charted fourteen times on the Hot Country Songs charts with singles released by Liberty, Imperial and United Artists labels. He also sang backing vocals for Ray Price.

Sanders was originally a disc jockey in Elizabethtown, Kentucky and later a performer at the Lincoln Jamboree and Renfro Valley Barn Dance. He recorded a few rockabilly songs in 1957 under the name Curly Sanders before making his Grand Ole Opry debut in 1959. A year later, he signed with Liberty, reaching #18 on the country charts with "A World So Full of Love" and #20 with "Lonelyville".

In 1968, Sanders won Top New Male Vocalist at the Academy of Country Music.

Sanders is also credited with putting singer Ron Lowry in touch with Gene Autry who signed him to his Republic label. Lowry would go on to have a hit with "Marry Me".
-Source: Wikipedia

Get It Done - 31 Ways to Release Your Inner Boss - Paperback