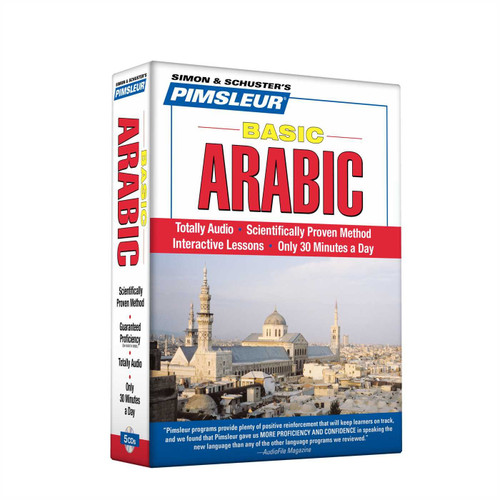 SKU:
UPC:
9780743550741
Condition:
New
Availability:
Usually Ships in 24 Hours
Shipping:
Free Shipping
This audiobook is a publisher's overstock:
It will have a remainder" (scratch or pen) mark through UPC code, some items will have minor exterior wear & tear from being handled."

The Pimsleur® Method: the easiest, fastest way to learn a new language. Completely portable, easily downloadable, and lots of fun. You’ll be speaking and understanding in no time flat!

This course includes Lessons 1-10 from the Arabic (Eastern) Level 1 program - 5 hours of audio-only effective language learning with real-life spoken practice sessions. Get a chance to test drive the incredibly effective and efficient, world-famous Pimsleur Level 1 Program. Each lesson provides 30 minutes of spoken language practice, with an introductory conversation, and new vocabulary and structures.

Detailed instructions enable you to understand and participate in the conversation. Practice for vocabulary introduced in previous lessons is included in each lesson. The emphasis is on pronunciation and comprehension, and on learning to speak Eastern Arabic.

The Eastern Arabic Language
Arabic is the world's 6th most common language with 295 million native speakers. It is also the liturgical language of 1.6 billion Muslims as it is the language of the Qur’an, the holy book of Islam.

Tech Talk
- CDs are formatted for playing in all CD players, including car players, and users can copy files for use in iTunes or Windows Media Player.

In the Shadow of the White House by Jo Haldeman - Hardcover