Own The Moment by Carl Lentz - Audio CD 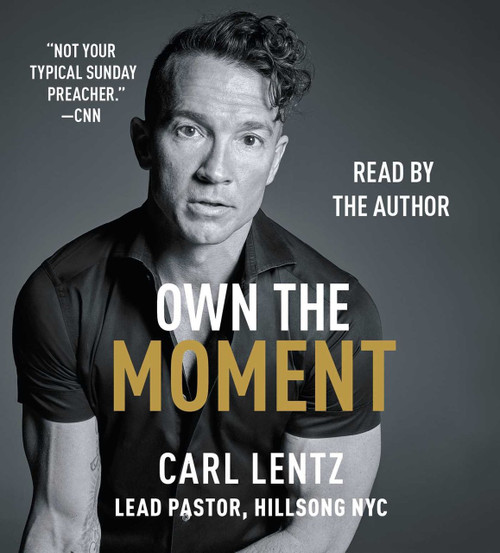 Own The Moment by Carl Lentz - Audio CD

SKU:
UPC:
9781508243182
Condition:
New
Availability:
Usually Ships in 24 Hours
Shipping:
Free Shipping
This audiobook is a publisher's overstock:
It is in shrink-wrap and will have a remainder" (scratch or pen) mark through UPC code, some items will have minor exterior wear from being handled."

Own The Moment by Carl Lentz - Audiobook, CD, Unabridged

When you think of a Christian pastor, you probably don’t envision a tattooed thirty-something who wears a motorcycle jacket, listens to hip-hop music, references The Walking Dead and Black Lives Matter in his sermons, and every Sunday draws a standing-room only crowd to a venue normally used for rock concerts—in godless New York City, no less.

But then you clearly have never met Carl Lentz.

As lead pastor of the first United States branch of global megachurch Hillsong, the former college basketball player is on a mission to make Christianity accessible in the 21st century. In Own The Moment, he shares the unlikely and inspiring story of how he went from being an average teenager who couldn’t care less about church to leading one of the country’s fastest-growing congregations—how one day he is trying to convince a Virginia Beach 7-Eleven clerk to attend his service, and just a few years later he is baptizing a global music icon in an NBA player’s Manhattan bathtub.

Amid such candid personal tales, Lentz also offers illuminating readings of Bible passages and practical tips on how to live as a person of faith in an increasingly materialistic world. How do you maintain your values—and pass them onto your children—in a society that worships money and sex and fame? How do you embrace your flaws in this Instagram era that exalts the appearance of perfection? How do you forget about “living the dream” and learn to embrace the beauty of your reality?

These are just a few of the many important questions Lentz answers in Own The Moment—a powerful book that redefines not just Christianity but spirituality as a whole.

About the Author
Carl Lentz pastors Hillsong Church NYC, an eight-thousand-member Christian congregation in the heart of Manhattan. Born the youngest of four in Williamsburg, Virginia, he was raised in a Christian household but struggled to connect with the local church concept and religion in general. At age twenty, he discovered his calling and enrolled in the Hillsong International Leadership College in Australia, where the Hillsong Church was founded in 1983. While completing his pastoral training there, Lentz met his wife and copastor, Laura. In 2010, they helped launch Hillsong Church NYC, the first US-based branch and one of the fastest growing churches in America. Known for reaching “the famous to the nameless,” the couple now lives in Montclair, New Jersey, with their three amazing children. Own the Moment is his first book.

One by One - Opioid America by Nicholas Bush - Hardcover