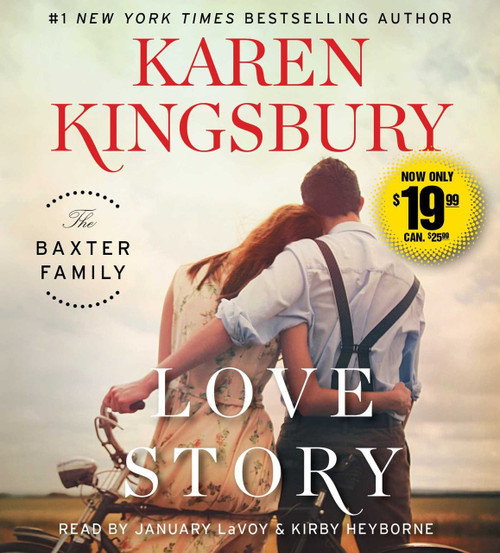 SKU:
UPC:
9781508249061
Condition:
New
Availability:
Usually Ships in 24 Hours or Less
Shipping:
Free Shipping
This audiobook is a publisher's overstock:
It is in shrink-wrap and will have a remainder" (scratch or pen) mark through UPC code, some items will have minor exterior wear from being handled."

From the day they met, John and Elizabeth were destined to fall in love. Their whirlwind romance started when they were young college students and lasted nearly thirty years.

So when John Baxter is asked to relive his long-ago love story with Elizabeth for his grandson Cole’s heritage project, he’s not sure he can do it. The sadness might simply be too great. But he agrees and allows his heart and soul to go places they haven’t gone in decades. Back to the breathless first moments, but also to the secret heartbreak that brought John and Elizabeth together.

At the same time, Baxter family friend Cody Coleman is working through the breakup of his complicated relationship with Andi Ellison. He is determined to move on when a chance sighting changes his plans—and heart. Can Cody convince Andi to give their love another try, or is it time for them to say goodbye for good?

As school comes to an end, Cole presents his report on the love story between his grandparents John and Elizabeth Baxter. It is a tale that touches the hearts of the entire family, and one that causes Cole to better understand his own beginning.

Whether you’re meeting the Baxter family for the first time or finding them all over again, Love Story will stir your heart and remind you of the generational impact of love and the eternal bond of family.

About the Author
Karen Kingsbury, #1 New York Times bestselling novelist, is America’s favorite inspirational storyteller, with more than twenty-five million copies of her award-winning books in print. Her last dozen titles have topped bestseller lists and many of her novels are under development as major motion pictures. Her Baxter Family books are being developed into a TV series slated to debut fall 2019. Karen is also an adjunct professor of writing at Liberty University. She and her husband, Donald, live in Tennessee near four of their adult children.