Grit The Power of Passion by Angela Duckworth - Audiobook 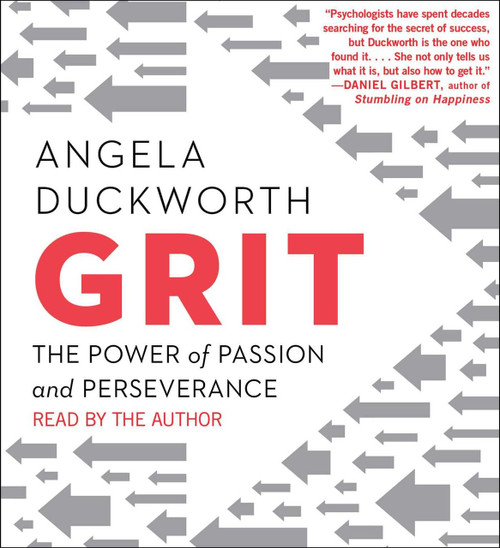 Grit The Power of Passion by Angela Duckworth - Audiobook

Grit - The Power of Passion and Perseverance by Angela Duckworth - Unabridged Audiobook 8 CDs
In this must-read book for anyone striving to succeed, pioneering psychologist Angela Duckworth shows parents, educators, students, and businesspeople—both seasoned and new—that the secret to outstanding achievement is not talent but a focused persistence called “grit.”
Why do some people succeed, and others fail? Sharing new insights from her landmark research on grit, MacArthur “genius” Angela Duckworth explains why talent is hardly a guarantor of success. Rather, other factors can be even more crucial such as identifying our passions and following through on our commitments.
Drawing on her own powerful story as the daughter of a scientist who frequently bemoaned her lack of smarts, Duckworth describes her winding path through teaching, business consulting, and neuroscience, which led to the hypothesis that what really drives success is not “genius” but a special blend of passion and long-term perseverance. As a professor at the University of Pennsylvania, Duckworth created her own “character lab” and set out to test her theory.
Here, she takes readers into the field to visit teachers working in some of the toughest schools, cadets struggling through their first days at West Point, and young finalists in the National Spelling Bee. She also mines fascinating insights from history and shows what can be gleaned from modern experiments in peak performance. Finally, she shares what she’s learned from interviewing dozens of high achievers—from JP Morgan CEO Jamie Dimon to the cartoon editor of The New Yorker to Seattle Seahawks Coach Pete Carroll.
Winningly personal, insightful, and even life-changing, Grit is a book about what goes through your head when you fall down, and how that—not talent or luck—makes all the difference.
About the Author
Angela Duckworth, PhD, is a 2013 MacArthur Fellow and professor of psychology at the University of Pennsylvania. She has advised the White House, the World Bank, NBA and NFL teams, and Fortune 500 CEOs. She is also the Founder and Scientific Director of the Character Lab, a nonprofit whose mission is to advance the science and practice of character development. She completed her BA in neurobiology at Harvard, her MSc in neuroscience at Oxford, and her PhD in psychology at the University of Pennsylvania. Grit: The Power of Passion and Perseverance is her first book and an instant New York Times bestseller.
Approx 9 Hours
8 CDs
Publisher: Simon & Schuster Audio; Unabridged Edition
ISBN-10: 1442397136
ISBN-13: 978-1442397132

The Structure of Shawls with Angela Tong - DVD

Getting to Yes by Roger Fisher - Updated - Audiobook 6 CDs

The Leader In You How To Win Friends Influence People CD