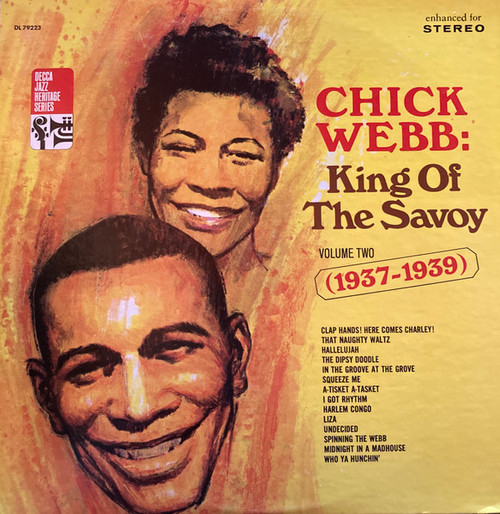 A1 Clap Hands! Here Comes Charley!
A2 That Naughty Waltz
A3 I Got Rhythm
A4 Squeeze Me
A5 Congo
A6 The Dipsy Doodle
A7 Hallelujah

Prominent drummers such as Buddy Rich, Gene Krupa, & George Wettling hailed Chick Webb as the best and most influencial of all the Big Band drummers. He was born with a physical deformity described as TB of the spine. To earn money for his first set of drums at age 11 he worked as a newsboy. By the early 1920s he was playing drums on excursion boats in Baltimore Harbor. He moved to New York where he freelanced. He played with and became lifelong friends with Duke Ellington . Webb formed his first small band in 1926. Slowly gaining momentum, in 1935 he hired the shy and unsure teen-aged Ella Fitzgerald. Now headlining at The Savoy Ballroom in Harlem, Chick Webb was no longer an also ran to the likes of Ellington, Fletcher Henderson, or Cab Calloway. In 1938. now with Van Alexander as his primary arranger, Webb and Ella became national stars with the million seller "A-Tisket, A-Tasket". His final recording was on April 21, 1939.
Also known as Little Chick, Webb had suffered from ill health from birth. His spine was malformed. Peers note that he rarely complained, was "an uncommonly nice man to work with", he "hardly ever became upset when things went wrong", & that he was "very unselfish". Ella Fitzgerald's legal guardian, Chick Webb passed away June 16, 1939 at John Hopkins Hospital in Baltimore with his wife Sally Hart Webb at his side.
-Source: Discogs

The Blasters – Over There (Live At The Venue, London) - LP