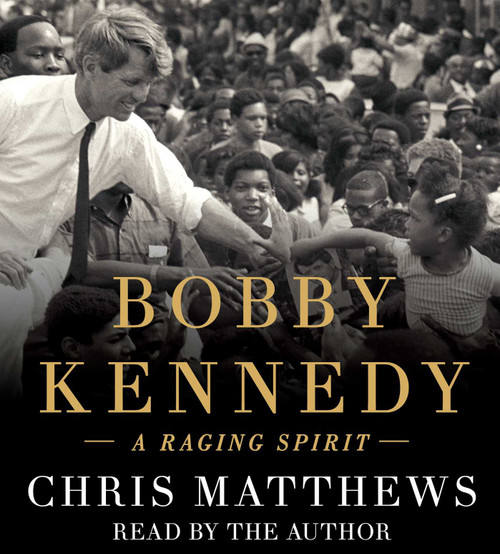 SKU:
UPC:
9781442389984
Condition:
New
Availability:
Usually Ships in 24 Hours
Shipping:
Free Shipping
This audiobook is a publisher's overstock:
It is in shrink-wrap and will have a remainder" (scratch or pen) mark through UPC code, some items will have minor exterior wear from being handled."

With his bestselling biography Jack Kennedy, Chris Matthews profiled of one of America’s most beloved Presidents and the patriotic spirit that defined him. Now, with Bobby Kennedy, Matthews provides “insight into [Bobby’s] spirit and what drove him to greatness” (New York Journal of Books) in his gripping, in-depth, behind-the-scenes look at one of the great figures of the American twentieth century.

Overlooked by his father, and overshadowed by his war-hero brother, Bobby Kennedy was a perpetual underdog. When he had the chance to become a naval officer like his older brother, Bobby turned it down, choosing instead to join the Navy as a common sailor. It was a life-changing experience that led him to connect with voters from all walks of life: young and old, black and white, rich and poor. They were the people who turned out for him in his 1968 campaign. RFK would prove himself to be the rarest of politicians—both a pragmatist who knew how to get the job done and an unwavering idealist who could inspire millions.

Drawing on extensive research and interviews, Matthews pulls back the curtain on the private world of Robert Francis Kennedy. Matthew illuminates the important moments of his life: from his early years and his start in politics, to his crucial role as attorney general in his brother’s administration and, finally, his tragic run for president. This definitive book brings Bobby Kennedy to life like never before.

About the Author
Chris Matthews is a visiting professor at Fulbright University, Vietnam. He is the author of the New York Times bestsellers Bobby Kennedy: A Raging Spirit; Jack Kennedy: Elusive Hero; Tip and the Gipper: When Politics Worked; Kennedy & Nixon; and Hardball. For twenty years he anchored Hardball with Chris Matthews on MSNBC.

The House on Maple Street: And Other Stories by Stephen King - Unabridged Audiobook 5 CDs